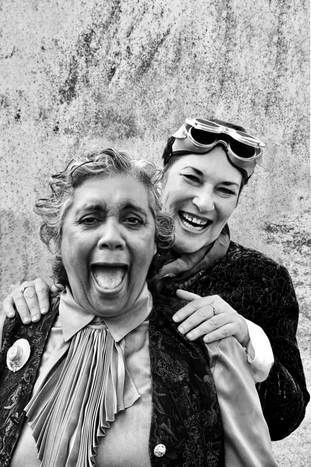 ​Intrepid performers Roxanne McDonald and Barbara Lowing navigate risky terrain, facing their own mortality as they journey through the heart line of their lives and into the hilarious misadventures of the women who made them who they are today.

Rovers comes from the award-winning Belloo Creative team and is a bold, original work, celebrating the grit and daring of women trailblazers. Woven from true stories and wild machinations, this rigorous and poetic work will resonate with audiences of all ages as the two actors revel in the rough and tumble of multiple stories and characters.

This is a joyous and heartfelt celebration of Australian women who’ve dared to follow their dreams.

Katherine Lyall-Watson (Writer)
Katherine is the co-artistic director of Belloo Creative. In 2013 she was shortlisted for the Patrick White Playwrights’ Award for her play Motherland, which went on to win numerous awards for its premiere season with Belloo Creative.

Caroline Dunphy (Director)
Caroline is Co-Artistic Director of Belloo Creative and a current Theatre Associate at NORPA. In a career as actor and director her directing work for Belloo Creative includes a national tour of Motherland produced by Critical Stages, and Hanako for the Brisbane Festival at the Powerhouse.

Roxanne McDonald (Actor)
Roxanne has been working in theatre and film since 1984, performing all over Australia and internationally. Roxanne received a Matilda Award in
1999 and an ACPA Award for her contribution to the arts.

Barbara Lowing (Actor)
Barbara has contributed to the creation of over 40 new works for the
Australian stage and has received Matilda Awards (2007 and 2013), Groundling awards, MEAA/Equity awards and a Goldie.

​
Belloo Creative is supported by the Queensland Government through Arts Queensland.
Rovers was developed with support of NORPA and premiers at NORPA on 17 August 2018.
​