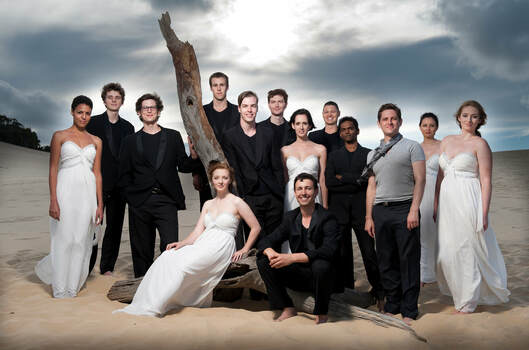 
​"As if the gates of heaven had opened"
– New York Times

"...the finest choral singing that I have ever heard in Australia."
– Limelight Magazine

It is with high artistic energy that The Australian Voices commission and perform the work of Australian composers. 2018 commissions include Lachlan Skipworth, Lisa Young, Alice Chance, Joe Twist, Sean O'Boyle and Gordon Hamilton.

Recently The Australian Voices has recorded new works intended for “performance” on YouTube. Hamilton’s composition The 9 Cutest Things That Ever Happened has been viewed over one million times. In 2014 they made international headlines with a video of Rob Davidson’s Not Now, Not Ever!, a musicalisation of Julia Gillard’s ‘misogyny’ speech. A treatment of Noel Pearson’s eulogy to Gough Whitlam was premiered on live TV on ABC’s Q&A program, in Pearson’s presence.

Their album for Warner Classics was observed by Gramophone Magazine to "boast a crisp, resonant delivery of the sonic goods under Hamilton's confident direction." In 2013 they released a songbook with Edition Peters and in 2016 an album for ABC Classics.

Recently the group has brought their distinctly Australian sound to audiences in Guatemala, Mexico, China, the UK, Germany, New Caledonia, USA, and Palestine.