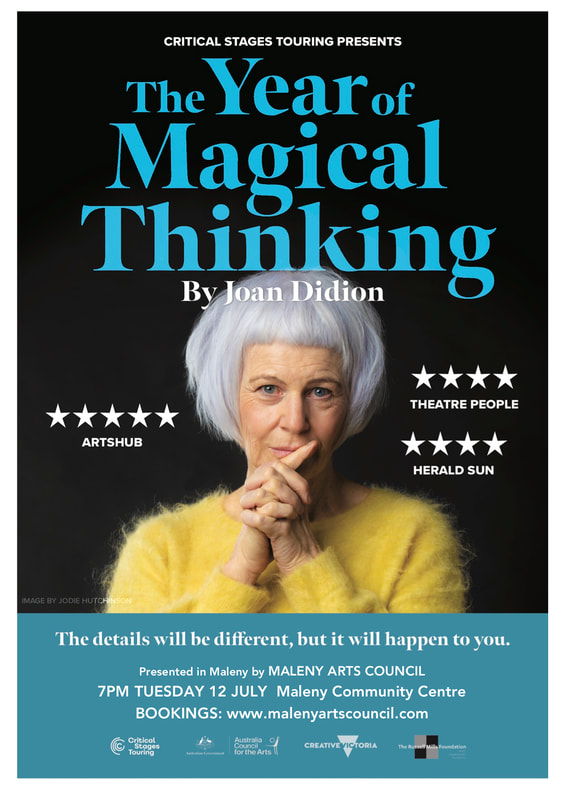 TICKETS
Adults $45   Members $40   Students/Pension Card Holders $30
BOOK NOW
THE YEAR OF MAGICAL THINKING
​The details will be different, but it will happen to you.

This highly personal account of loss through the lens of hope unpacks a surreal and overwhelming time in Didion’s life as she faces the sudden loss of her husband John, and later her daughter Quintana. Deeply moving, sometimes funny, and ultimately joyful, this is one woman’s story of the journey to find acceptance, and the lessons learnt in letting go.
​
After critically-acclaimed sellout performances throughout Australia, this is a must-see production for fans of great drama.
WHAT THE REVIEWERS SAID
★​ ★​ ★​ ★​ ★
“We felt like privileged listeners, given access to an extraordinarily insightful confrontation with the way in which grief loosens our grasp on reason” Arts Hub

★​ ★​ ★​ ★​
“The audience is mesmerised, holding on to every word, gesture, with eyes following her movements, taking in what’s been so eloquently said” Theatre People

★​ ★​ ★​ ★​
“Jillian Murray gives a superb performance - poised, vulnerable, intelligent, and full of the subtlest ironies”
Herald Sun
​
“This is yet another fine – and, if you like, ‘magical’ – performance from Jillian Murray..."
Stage Whispers

“a one person show par excellence”
The Blurb